These last two weeks Catalonia has lived a wave of protests, incidents and peaceful walks as a way of showing rejection to the imprisonments of nine Catalan politicians and the Spanish government attitude against this resolution.

What has made these unanimous marches different from two years ago –when the referendum happened– or early this year –when the trials took place– is that this time citizens are been led by apps or channels on Telegram rather than known figures.

In the past, Catalan civilians knew where to protest and how to organise by following instructions from CDR Catalunya (the Republic Defence Committee) on their Twitter account.

Today, a new group has emerged and it’s asking Catalans to show their disagreement to Spain and to the world by conducting several demonstrations and protests. This organisation is called Tsunami Democratic.

And what’s new about them? This Catalan protest group, which claims to be organised by citizens, hasn’t introduced a leader yet and is using their Telegram channel (tsunamid) and their app (only for Android) to communicate with their followers.

The way users are getting information is changing. Nowadays, they are not only following official committees sources but also apps, bots and channels on consumers’ preferred messaging apps such as Telegram, which claims to be more secure than WhatsApp.

Can Tsunami democratic be a bot?

Many news bots are used to “convey content from multiple platforms and drive existing traditional news to social media” (Lokot and Diakopoulos). Tsunami Democratic, however, is using this channel as the primary source to communicate with their community (specially for the ones that don’t own a QR code that validates their app).

While Telegram bots –autonomous programs that interact with people using artificial intelligence to understand their needs– allow users to interact and reply to messages, Telegram channels are mainly used to broadcast messages.

According to Telegram, the main difference between bots and channels is this lack of interaction, where users can only join or leave the channel/group and follow its notifications – where the chat is disabled.

From a definition perspective, @tsunamid is a channel used to deliver updates rather than interaction. However, the main autor of this channel could be a bot(s) that automates messages and schedules posts.

Similar to Tsunami Democratic, there are other channels that have played a role on getting, contrasting and delivering information to users during this Catalan autumn.

Anonymous Catalonia (anoncatalonia) is a Telegram channel that has 244.9K subscriptors and claims freedom of expression, internet and social media in an anonymous way.

This channel, created for citizens and by citizens, gathers most of its content via a Telegram bot called Alerta Tardor Calenta (TardorCalentaBot). When using it, people need to fill out a form and provide evidences about the issue they want to report or share. 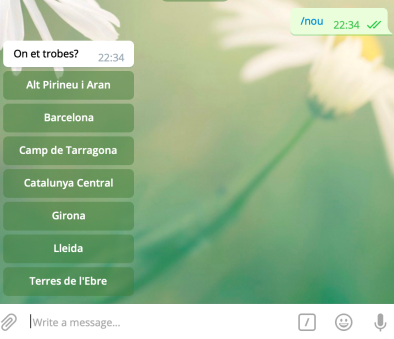 Anonymous Catalonia has also created a bot that is aimed to erase all trolls from groups and channels called Troll Hammer (trollHammer_bot). With a database of  2.847 trolls, the bot prevents these accounts to join any group of channel where the bot is implemented. So far, it has been used in 222 channels.

Any feedback? Let me know in the comments or at @mcrosasb

Be the first who shares this information: