Tea rituals . . #igersjapan #throwbackmemory #japaneseteaceremony #ritualstea #travelagainsoon✈️
One of these places I should have been this week . . . #igersjapan #fujisan #lakekawaguchiko #triptojapan #picturesthrowback #throwbackmemories❤️
Since day 1 of Spain’s lockdown, we have been choosing a word that would define how we felt during the day. It is very interesting to see how our mood has changed (from frustration to enjoying little steps and things) until today. A good exercise to avoid going mental and appreciate everything that life is giving to us. #igersworld #confinementcreatif #postits #letsgonuts

Since the Covid19 arrived in Europe and the alarm state was officially declared in several countries, there have been several initiatives to combat the fake news and avoid a feeling of panic.

First infographics on how the virus was spread out and tips to not get infected were released in newspapers, blogs and government websites raising awareness and claiming a civic duty.

Numbers were increasing as well as fake news on how to prevent the infection or the syntomps. Below, I’ve gathered 5 good examples of how official institutions have used messaging apps such as WhatsApp to combat fake news and bring information closer to citizens:

The current chatbot, available in English, Spanish, French, Hindi, Italian and Portuguese shares information not only on the latest numbers or protection, but also facts to combat ‘Mythbusters’.

By typing numbers associated with several topics, you can get further information from official sources: 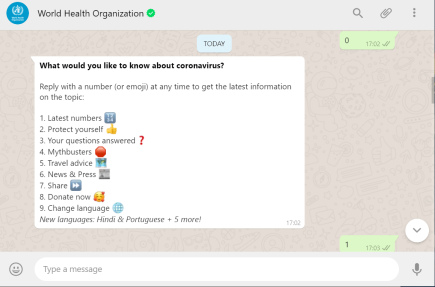 From the Frequently & Asked questions, there is some important information on what are coronaviruses, how these affect humans/animals or if it’s mandatory to wear a mask:

For more information on updated data by the WHO you can go to this dashboard and click on any country to see the number of confirmed cases, deaths and the daily change:

Last Wednesday, the Spanish Government launched a chatbot on WhatsApp that replicates most of the information from the WHO bot.

This bot, apart from main Frequently Asked Questions or official releases, it also contains a section to combat fake news and stay at home tips: 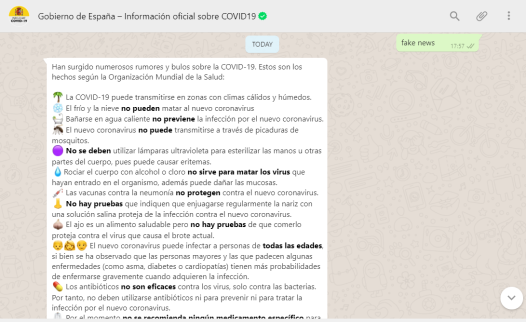 Its main difference is that users don’t need to type ‘commands’ (or numbers in the case of WhatsApp bots) but they also type any question they would like more information on – and in most of the cases it works!

Yesterday the Department of the Vice-Presidency, Economy and Finance, and Health launched a WhatsApp bot that aims to combat the disinformation by providing accurate numbers and other FAQs.

Similar to the WHO chatbot, this bot also provides information on diagnosis, how to protect, etc. In addition to that, they also cover other interesting points such as how to help, gender violence or fake news.

For this latest one, this bot provides some tips such as double-checking the source, the information provided and avoid the retweet effect that hasn’t been contrasted. For more information, they have been gathering frauds or phishing that have happened since the COVID19 on this page.

Three weeks ago, the UK’s Government launched a chatbot for its citizens replicating the OMS model.

For 24 hours, the bot stopped working and it was re-launched the following day advising all users that had initiated the conversation that could go back and talk to it.

This bot doesn’t provide different information than the OMS one and doesn’t allow to look for local regulations, a feature that could be very useful for a person that is looking for things to do / don’ts in their neighborhood.

Even if the bot is not able to understand the natural language, it advises that this is an automated service and that there is no person behind to handle a personalised conversation: This automated service is unable to respond to specific questions and any messages you send will not be read by a person.

5. The helpdesk’s bot from the Indian Government

Corona Helpdesk is the chatbot that the Indian Government released three weeks ago for all its citizens in English and Hindi.

Like all the other chatbots, its mission is to raise awareness and verify the information that is been shared on social media.

On a positive note, this chatbot has images, infographics and hyperlinks to the Youtube where experts are sharing, graphically, how to wear a mask or protect themselves from misinformation:

To help citizens to strengths their mental and physical health, the bot also shares links to Yoga sessions and tips for staying at home.

The most characteristic feature of this bot, though, is that it replicates a master-bot structure: it has several links to bots more specifics depending on the state where you live.

Once the user clicks on these, a new chat is opened (either on WhatsApp or Facebook Messenger) and local information is displayed:

A bit about chatbots…

Since the rise of bots in 2016, companies are exploring this new channel to interact with their consumers in their preferred messaging apps such as Facebook Messenger, WhatsApp, Instagram or Twitter.

Which are its benefits? Amongst others we have the below:

These messaging apps drive the way information is been displayed – Facebook has its own templates, Twitter has its character limitations and WhatsApp has just learned from Facebook and its starting very carefully. Some of their rules are below:

More examples? Let me know in the comments or at @mcrosasb!

Be the first who shares this information: